Critical Mass: A band with a message! 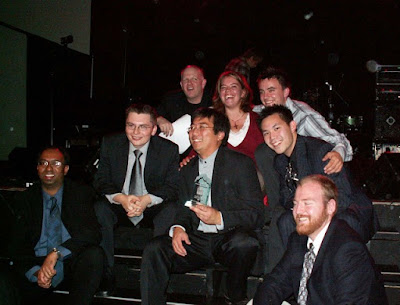 How did the group Critical Mass come about?

We've been around for over 20 years.  We started out playing in churches but quickly went into the studio.  Our first demo, Faith Looks Up, was hugely successful.  Our first two studio albums, "Completely" and "Grasping for Hope in the Darkness" both won Best Rock Album honors at the Canadian Gospel Music Association Covenant Awards.  In 2002, we played for a million people at World Youth Day in Toronto, when Pope John Paul II came to visit.  I often say we are a very well kept secret as we probably have played in front of one of the largest audiences ever in history for a rock band.  However, because of the nature of the event, most people didn't know it was us playing at the event.  We have since released another 3 studio albums, with another on the way.  Because we all had day jobs (I am a professor of Electrical and Computer Engineering) and family obligations (I have 9 children), we weren't able to hit the road like most bands.  This is another reason many people haven't heard about us.

How many members are in the group and can you describe their positions and contributions to Critical Mass?

Since the second album, I have been the lyricist and lead singer for the band .  We have numerous talented musicians and songwriters over the years in the band, but especially since the second studio album, I have been the one constant in Critical Mass.  In fact, I think there have been close to two dozen touring and studio musicians over the years.  Incredible talent and wonderful people.  When I reflect back on the years, I count myself incredibly blessed to have worked and written with these wonderfully talented folks.

How did Waterloo, Canada influence your group and what are some of the notable moments you experienced back home?

We are in a university town.  I actually work at the University of Waterloo.  I have been here since my Masters degree.  As such, I have deep connections here, whether it is with respect to my day job or my extracurricular activities (church, soccer, coaching).  Most importantly, my producer, Andrew Horrocks, whom I consider both a mentor and a friend, has worked on every studio project with me.  If I were anywhere else, he and I may not have connected.  Andrew has won Best Producer Honors several times from the Canadian Gospel Music Association, and we have a great synergy in the studio.  Critical Mass would never have been as successful without his help.

I understand you have influences like the Beatles and Green Day, name some of the things that are parallel to these iconic groups?

The Beatles, in my opinion, are still the most influential music group ever, and I have to admit to being a huge fan.  All of our albums have a concept wrapped around the songs and that is due to my love of the Beatles' album, Sgt Peppers Lonely Hearts Club Band, which is considered to be the first concept album ever released.  However, many fans and crowd reviews of our music has pointed to a similarity in my singing style and musical delivery to Green Day.  It wasn't a purposeful direction  but it just happened.

Give us some insight on the journey of Critical Mass and shed light on the creative process?

Our music is born out of a need to tell a story or to get a message out there.  Many of our fans have commented on our lyrics as having substance, and that is probably due to my day job as a professor.  Thus, when we start a project, it is always the message and lyrics that are written first.  The music is then written to the music.  Because I have many collaborators on the music, we often have quite an eclectic mix of styles and sounds on every album.  Most of our songs change up significantly from song to song.

Not only Covid-19 but also a recent high conflict divorce has greatly influenced the music that I am writing now.   Our first two singles that we have released are "Misery, My Friend", which talks about depression and mental wellness and "Serenity", which uses the serenity prayer as a way to help people through their personal crises.  So, as you can see, the music is greatly influenced by the pandemic and the resulting issues that come from the social isolation.   The next album will have a lot of personal songs that I wrote as a form of personal therapy.  You will definitely see the circumstances of my life in these lyrics.

If there's anything else you could be doing, what would it be?

I have lived a rich life with many highs.  I am a professor, musician, soccer coach, entrepreneur and played music with the pope.  However, I have also hit many lows including a bankruptcy, divorce and parental alienation.  Through it all, my friends, my counsellors and my faith have kept me going.  Now, I want to start sharing this with others.  On our website, www.criticalmassmusic.org, we have a section with our patrons called Life Hacks with Critical Mass, where I share my life stories, alongside with my music, in the hopes of being able to help others live their life abundantly.  This is what I want to focus on moving forward.
MUSIC VIDEO