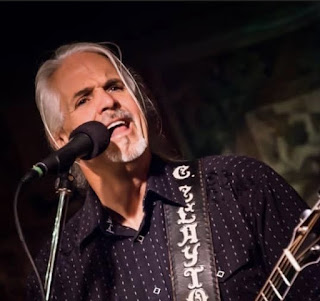 1. So tell us about your upbringing:  How did you get into making music?

I am "Musician born, American Made"!  I was born in Burlington, NC and named after my musician father, Currie Wayne Clayton Sr.
I was always surrounded by music.  My musical career began as a drummer at the early age of 3.  Winning several musical contests in my earlier years, my love for guitar came at the age of 14.  My talents are 100% God given and I am totally self taught in all the instruments I play . . . guitar, drums, bass, fiddle, keys.  Singing, writing and producing have all come naturally to me as well.
2.  Touring the United States is a Major accomplishment.  Can you tell us about your first tour?
I moved to St. Louis from Delaware in the summer of 1993.  My GF at the time landed a job as lead vocalist for the lounge band '7th Heaven' so I packed my things and made my way to St. Louis.  I eventually met many of the bands that performed at one of the biggest night clubs in Sauget, Illinois - Pops Saloon!  It was notorious for bringing in top talented bands.  I was scouting for my next band to be a part of and join.  It so happened a great band called John Doe was looking for a guitar player and singer.  My GF and I both joined and started touring the Midwest and South East for about 3 years.
3.  So how did you meet the band Molly Hatchet?
My friend "Booger Man" was a tattoo artist and he was giving Molly Hatchet's bass player, Andy McKinney, a tattoo.  He told Andy about me and he said he wanted to meet me.  I had a Harley and borrowed one from my dear friend for Andy to ride. Andy and I went riding all day.  A week later I received a phone call from Bobby Ingram, lead guitar player and owner of  the band, for an audition at the House of Blues in Myrtle Beach, SC.
4.  I understand that you're the co-owner of Cabin Fever Studio Productions so tell us about your operation and how does it contribute to you being a musician?
Being a musician means that you have to have a great ear and you are usually on a shoestring budget.  LOL  So you learn how to record your own music such as a 4 track to a cassette to a 6 track to a zip drive and Roland VS2400 to Spectral aka computer recording which brings me to now . . .  We have a Hybrid Studio Analog To Digital!  I have been recording since 1987.  I always dreamed of owning and operating a Top Notch Studio and GOD has put me smack in the middle of one!  A to the Men!  So now I have the luxury of recording myself without rushing and putting things out there that I wished I would have fixed!  It's also great to have other musicians come in and record and be a part of making their songs and dreams come true!  I love being a producer and engineer as well as an artist/musician.
5.  I see that you are a multi-talented artist.  Does music run in the family for how did you acquire such gifts?
It is all GOD given talent.  I am self taught on all the instruments that I play.  It also runs in the family!  My father, Currie Wayne Clayton Sr., was a Guitar/Harmonica/Piano player and vocalist.  My mother, Betty H. Baron, was also a singer, mostly in the church chorus.  Both of my sisters, Joyce and Jill Clayton, are musically talented as well as many of my cousins!
6.  So tell us about your latest project and the creative process behind it.
I've been recording many of my songs that I never got around to recording.  Owning the studio, I have time to do it "my way, my time".  I record as it comes to me, listen and step back from it and give it a chance to breathe.  Then I will go back and change what I feel needs changing or rearranging.   I have also been working on the studio, putting new gear and pieces in place.
7.  So what do you have planned for the future?
With GOD'S hands in it, the sky's the limit!  I am hoping to be a big hitter and be a major part of  the music and recording industry as Producer/Engineer/Musician/Vocalist and to land several songs as #1 hits on the charts!  (Thus the name for our record label, Charted Records!)
8. Any last remarks?
You have to believe it to receive it!
https://curriewayneclayton.com curriewayneclaytonjr.hearnow.com cabinfeverstudioproductions.com ChartedRecordsLLC@gmail.com https://www.youtube.com/c/CurrieWayneClaytonJr Facebook: https://www.facebook.com/curriewayne/ Instagram: www.curwayclay.com