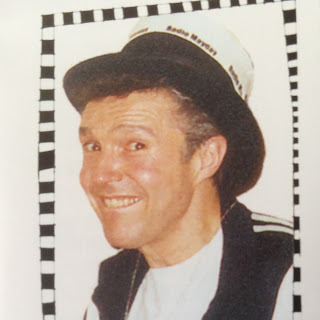 So Mick, I understand that you're from the U.K.; can you tell us about your upbringing?

Like a lot of kids I had a violent, frightening father and when he came for me or my sister we and my mum always feared he would lose control and kill us, I could always here my mum in the background shouting, 'no John no', so I put that at the end of my song, 'When Teeth Hit The Bottom Lip', about losing control.

When I was 11yrs old I saved up all my money including my School lunch money for three months till I had enough to buy my first guitar.

I played in many bands when I was young, did the Holiday camp summer season gig and came close to making it, but 'no cigar', and as starvation set in I became an electrician, but still always wrote songs.

How long have you been doing music and what inspired you to start?

I have always been doing music in one form or another since I was a kid, but I always enjoyed writing songs and looking up 'who wrote' the hit single.

I guess I was a lucky kid because although I found 'the look of a guitar' totally mesmerising, I was very good at writing stories with compliments from teachers and I also loved to play football, which I played for every school year and the West of Kent and offered a trial to go professional. My fourth great love was animals and I wanted to be a Veterinary Surgeon. Unfortunately I became a little wayward :-) I enjoyed having fun too much.

How did you begin working with the Sonorus Record Label?

Sonorus Records approached me with a 10 yr deal for my song, 'There's Nothing Anybody Can Do', we both paid half the Promo costs but it didn't 'do it'.

So your music has over 1 million streams; can you tell us about your road to success?  Any tips and ideas you would like to share with upcoming inspiring artist?

I am a workaholic, but I have a 'can't be bothered' attitude :-( I couldn't spend hours slaving away on a guitar trying to write a song, I wait till something will inspire me or I'll just get a tune come to me, and when that does happen I can spend weeks if not months writing it, constantly thinking about it. It's taken a few years to get over one million streams, but I love to write songs and streams tell you people are listening to them which is really great. I would say to anyone, write a song 'that you like', you will never write a song that everyone will like.

Besides music, what other things you may be interested in?

My first book came out last year: Message From A Star by Michael J. Clark, Pub by Austin Macauley. (On Kindle and Kobo as well). Happy to say I got great reviews from Kircus and Blue Ink and 4/4 from Booklife. For me it was the story that is universal, 'men never growing up'.

Some friendships are written in the stars.

Thirty years after their high school graduation, former best friends, Joe and Chad, accidentally meet again in an Orlando hotel. But there will be nothing accidental about the chain of events which lead the middle-age pair on the run from gangsters, drug dealers and ambitious cops.

Deciding to celebrate their unexpected reunion, Joe and Chad share laughs and nostalgic memories over ice cold beer but soon the two, feeling low about their less than adolescent appearance, decide to visit a shop specializing in making men look ten years younger. Receiving enthusiastic reviews from their families on their ‘renovated’ looks, the two push the boundaries and continue drinking at a club.

Here begins the set-up of the harmless gents and they fall into an ever-widening circle of disasters which ensure the men must test themselves… and their friendship.

Michael J Clark’s novel is a clever mash-up of wistful remembrances of youth and the ultimate road trip. Lurching from one catastrophe to the next, Joe and Chad find out about the limits of friendship and themselves.

put into all the schools in Croydon, Surrey,  by the Croydon Education Dept.

‘Me My Body And I’  https://www.youtube.com/watch?v=tCbPpfIGk-s

(an Empowering song, with Empowering words, to Empower the child, to 'Ignore'  the Bully)

We Know It's True By Mick J. Clark.

( which I was Grammy Nominated for this year).

I am very proud and pleased that WOA put out an EP with six of my 'Political songs' called:

And yes I still love and play football :-)

So what's the typical day of creation for Mick J. Clark?

I spend a lot of time at the computer, Promoting my songs,( and my book ), and when I have written a song I play it over and over again so when I go into the studio it cuts down the time, because it is a lot of money.

So tell us about your latest project?

I am lucky to have had two songs come into 'my little head' :-) that I have worked on, and finished one,called:  'A Song Has Gotta Swing Like Sinatra', out now,

and the other one out in a few weeks.

It's a great life as long as you 'don't take it seriously', 'lose your sense of humour and your fried' :-)