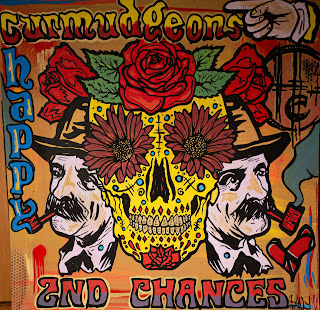 With members all hailing from Detroit, the Happy Curmudgeons started as an idea – making music with friends. This turned into doing gigs and then further became the catalyst to the group writing their own songs. Their first album, MEANT 2 BE, consisted of 11 works of pride and joy. Now, the band has been hard at work on a new project. The new album will feature guest appearances from Jim Moose Brown (Bob Seger Band), Mark Byerly (Bob Seger Band), Bobby Balderrama (original guitarist for Question Mark & The Mysterians) and Pepe' Espinosa. But before we get to the new album, let’s talk about a few tracks.

The first, of three tracks, in the spotlight is 2nd Chances. This is a 5-minute song which I am biased towards – I like longer songs. The length of the track lends itself to the calming tone of the song and vocals. Listening to the story being told, the lyrics feel reflective. The song depicts the journey someone can go through as they try to heal from a bad break up while still considering reconnecting with the ex. As the song reaches the second verse, it fills out with the addition of a drum line and secondary vocals, adding to the overall emotion of the song. Then there’s a guitar solo break and it is just chef’s kiss good.

The second song is called Jack Russell. This is true folk music through and through, complete with storytelling. Storytelling songs are always a good time – even if the story isn’t funny, it is usually a fun listen. This is no different. Already, this is livelier than the previous song. It gets feet stomping and heads nodding; the piano solo is the icing on the cake that takes the listener to an Old West bar where the piano is being played in the corner. One thing lingers during and after listening to this song: What did all these people have to do? That is never explicitly stated in any of the scenarios. But that’s the fun of the song, I guess.

The third song and the band’s newest single is I Know How You Feel. A more traditionally Country song with mostly vocals and guitars as accompaniment. It’s beautifully simple in that regard. The lyrics move between being comforting and a reality check. The speaker is understanding of his friend as they both share the same short comings. In that same vein, it can also serve as a warning to others to treat their loved ones well.

Overall, a fantastic set of songs that show only a fraction of the range this group carries. The band’s music is fun and nostalgic; really capturing the friendship of the members. Happy Curmudgeons have won a W.A.M. award for 2ndChances and the new album will feature some incredible guest performances. If you’re curious about the band, check out their website and other social media so you can keep up with current and future work.