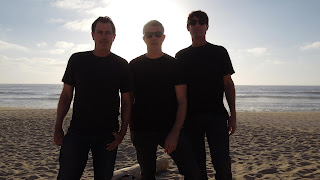 At a time when we are wading through seas of information, Spadaro (Morning Spy, Foxtail Summersault, and Tracing Figures), Baker (Tracing Figures) and Loftin (Morning Spy, Imperial Highway, Astral and solo work) have come together to create a rocking beacon of sound that reminds us of our humanity, our emotions, and our connection to one another. Named after the widespread impact of content overload, the San Francisco-based group pulses with the angsty influences of 70s psych bands and 90s alt. rockers: think Blue Cheer and The Stooges meet Jane’s Addiction and Filter. Since forming in 2021, Drowning Effect has released two albums, Drowning Effect (2019) and Techniculture (2021), both mixed by Gabriel Shepard (Cake, The Residents) at Oakland's 25th Street Recording and mastered by LA's Mike Wells (Jello Biafra, Green Day).

Rising from the deep is a sound that’s cuts through the age of digital noise in Drowning Effect’s second album, Techniculture, released in 2021. The psych rock power trio of James Spadaro, bass & guitar, Thad Baker, guitar & vox, and Mark Loftin, drums & percussion, pick up where they left off on their first album to once again meet the times with an aural warning sign that too much information – like too much of anything – can be toxic.

This time, the San Francisco-based outfit abandons a more stream of consciousness-style for a very structured, succinct story that begins and ends with what feels like a crash of lightning. Simple rhythms overlayed with distorted guitars and potent, echoing lyrics will have you orbiting The Sun in ‘Bright Lights’ and then slam you back down to Earth with ‘Gun.’

Come for the psychedelic sound, stay for the haunting visuals.