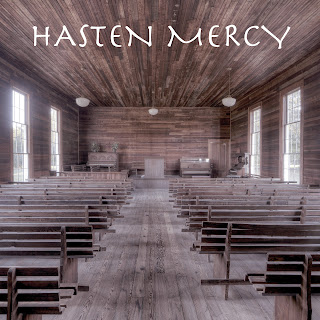 Using retro synths and modern tools, "Hasten Mercy" is the newest project from Head Fake member Michael Baker. Created around the question of whether it is possible to refocus his musical energy after years of pursuing a path more travelled, the EP is sure to enamor and inspire listeners.

The whole project had made use of minimal fancy sounds or frills, but it maintains its 80s inspired flair. This makes the music quite straight forward, giving the listener a calm experience leaving you lost in thought. The whole project maintains themes of self-reflection and perseverance. These Things and I Break Everything give a more timid sound; there is still some amount of perseverance but both songs show the singer reflecting on past decisions. On the other hand, Star You Are, with its more upbeat tempo gives the listener some motivation while, also anchoring the project’s overall themes. I definitely get moments where the songs feel like a love letter to something/someone you once held dear to you. And this letter is one of appreciation and apology.

Married and uncertain of his future, a young Toronto native, Michael ignored the advice of his musical mentors and headed off to law school, eventually landing in New York City. With a young family and 18-hour workdays, music found its way into his home by singing his young daughters to sleep and exposing them to various genres and styles. Oozing originality, "Hasten Mercy" is destined to create waves by highlighting influences of the '80s such as The Smiths and Stone Roses without changing the essence of his origin.

Link to the project: