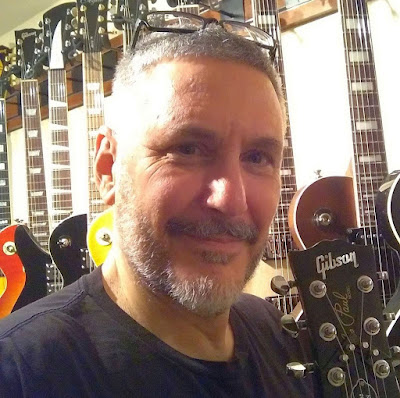 Could you tell us about your upbringing in Raleigh?

I am actually from Long Island, NY. I relocated to the Raleigh area in early 1994. When I was a kid, my father was taking acoustic guitar classes which ended up being short lived. When he gave it up, I picked up his guitar and started teaching myself. This led to my parents buying me an inexpensive electric guitar for Christmas. I would buy sheet music of Beatle songs I knew and worked on playing them. I figured since I knew how the songs sounded, I would know if I was playing them correctly. My parents were supportive in the sense they tolerated the noise (with my brother drumming) coming out of our garage or living room. I am a self-taught guitarist but did take a semester of music theory when I was in college many years ago. Although, I learned guitar by playing cover songs, I was always focused on writing original music which I have been doing since the late 1970s.

We understand you have an infusion of many influences; what impact does groups like the Beatles have on you?

The Beatles motivated and taught me to write music. I would listen to the songs very intently. Aside from the song structure itself (verse, bridge, chorus), I would pay close attention to the layering of the instruments, the effects, etc. I was particularly fascinated with the psychedelic period and what I describe as the “colorful” sound emanating from many of the songs during that time. Jimi Hendrix was a big influence on me as well and much of my lead guitar playing is inspired by Hendrix. As a kid, I bought a Jimi Hendrix note for note music book and learned rock scales that way. So, I occasionally have this strange mix of the Beatles and Hendrix in some of my songs. But I don’t try to sound like the Beatles or any other artist. I want to be me. I write from my own experiences and tap into my creative process.

Can you tell us about your latest project?

My latest project is to release singles instead of waiting a few years to release an album. Once I have 8 to 10 singles, I will release my third album comprised of the singles. I’m hoping to do that by the beginning of 2023. My first album, Leaving Dystopia, was released in 2013 and my follow-up, Hollow Moon, in 2018. I’m also thinking of releasing a “best of” after the third album is out.

If music was not your only thing, what else would you see yourself doing?

Well, I’m actually a board-certified hypnotherapist entering into my 12th year of practice and I love the work because I get to interact with clients and help them to resolve inner conflicts and to make positive change in their life. It’s a very rewarding field of practice.

Do you feel that singer-songwriters can still make a difference in music today?

Yes, but too many songwriters, artists and musicians are focused on the formulaic template the music industry demands in order to get signed to a major label. The mainstream music industry is not organic. It’s a manufacturing process that turns out prescribed formats. Pop music in particular is a commodity product where the creativity of the artist is stifled and replaced with corporate objectives and agendas. And, with the advent of streaming, making money is a challenge even if you are signed and promoted. I believe more artists need to be writing, recording and playing songs that help awaken society to the dysfunctional state that has become our reality. Part of the societal breakdown is because the music industry uses music as nothing more than a tool to push internationalist interests. Although there are obviously many songwriters, artists and bands who are trying to make a difference (and I tip my hat to them), there are still too many who are trapped in the watered-down state of homogenized sound.

Are there any other projects you have in the works?

Right now, my main focus is to continue writing, recording and releasing singles and then releasing an album of those songs. That’s my focus for 2022.

I want to thank you and your staff for giving me the opportunity to talk about my journey and my music. It’s platforms like yours that help independent artists, like myself, to get our music heard. Rock on!