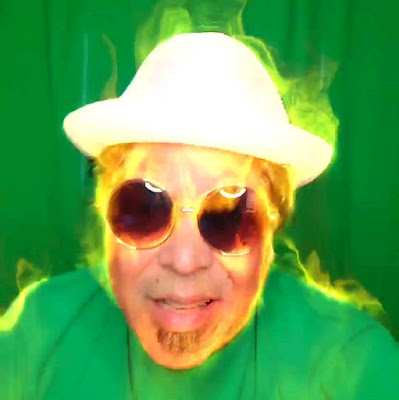 So Mr Mac, Where are you from and what's it like in your hometown?

I hail from Honolulu, Hawaii, USA. I live on Oahu, a beautiful island, though somewhat over-crowded. Other than that, the tourist brochures are fairly accurate. The vibe is laid-back and tropical.  Reggae (“Ja-waiian”),Hawaiian music and whatever corporate radio dictates you should listen to  are the favored genres. Bruno Mars went to the High School I teach at. Jack Johnson lives on the North Shore.

Honolulu is a scene that generally favors cover bands, rather than original acts--unless you fit into a popular genre. The original rock-punk scene is spirited, but small. In that way, if feels like a close-knit, underground community.

I understand you do alternative rock , can you tell us where some of your inspiration comes from?

My brother was a street musician in New Orleans and introduced me to the Blues and my first paid gig.

So talk about your latest album Invisible Lines

Invisible Lines is put together like a mix-tape for a road trip, offering the listener an odyssey of lyric-driven musical experiences that would propel them down the highway through a vast unknown landscape. Invisible Lines differs from my 2015 release, ShadowBox, in that it was recorded with a band that had been playing together for about 4 years. I think the ensemble effect is evident. Some of the songs themselves refer to the pandemic and the lines we draw between ourselves and the world. All of the songs are original, and document experiences from my life.

What’s your favorite song on this album?

Many people comment that they like “Jenny Was”, a story of Love’s labors lost. But my personal favorite is “Another Way to Go Too Far”.  The lyrics started out talking about the death of my brother, but morphed in a prescient way to reference the riots of the pandemic, and sadly, the death of bass player Howe Stidger, who plays and sings on the track, and who passed away before the album’s official release.

Being a musician, are there any challenges you face in today's music industry?

The greatest thing about the music industry today is its decentralized nature; it now depends more on the authentic caprice of individuals who have the world’s music at the click of a mouse.  Whereas before, musicians depended on a few key record labels and radio stations, it is now a free for all. Artists emerge out of the blue, buoyed by traffic trending to their streaming sites. Everything seems to be organic and the corporate mechanisms formally required to make it are no longer as consequential.

The irony is that it is difficult for independent artists to make any money. Pennies are paid for streaming, and few are interested in purchasing songs on music platforms such as Apple Music. Gigantic tours and massive publicity campaigns are still controlled by large corporations, and huge money is made from big concerts and ancillary merchandise.

Do you play any instruments?

Besides vocals, I play a Fender Telecaster and Stratocaster and also an electrified Martin acoustic. I have been known to riff on a harmonica from time to time--(but the lead on “Donna Donna” is an unheralded harmonica virtuoso known as Louie “the Fish” DeNolfo).

I also got into exploring pure sound with the late artist Stan Wood of Portland Oregon. He taught me to explore the noise-aspects of music and how to play the”vibraband”, a simple strip of rubber that sounds like a trumpet or a sax. This instrument hasn’t appeared yet in my current musical lexicon.

In addition, I dabble in didgeridoo, but neither of the latter instruments appear on my current album.

So what’s the creative process like on a day to day basis?

I often start out with free-form guitar improvisation in an open tuning. This then evolves to playing some covers and my older songs. Then I work on musical ideas--chord progressions and riffs that have been spinning around in my mind.

Songs often come to me in broken phrases, bits and pieces of interesting language that I hear in passing. For instance,  “Invisible Line” was about an irate chef who yelled at a waiter: “Why can’t you see my invisible line?” I’m a teacher as well, and some of my best lyrics have come out of extremely boring staff meetings.  Then again, a song might be built around a unique riff that came out of nowhere--or a modified,(maybe semi-stolen!), riff on the guitar.

Is there anybody you like to work with in the future? And Why?

I'm currently looking for players in my local area, especially a keyboardist. I think MR MAC would be a good opening act for The Eels due to both bands being lyric-driven, with eclectic influences.

Could you tell us some of your future plans?

Hawaii is very isolated. One of the things the pandemic has shown is how valuable the internet is. While I do intend to put together live shows on the island, I also want to enhance our internet presence-- perhaps streaming live or recording performances in studio for Tiktok, Facebook, Youtube and other streaming platforms.

I would like to thank Flyah Mag for their interest in my music.