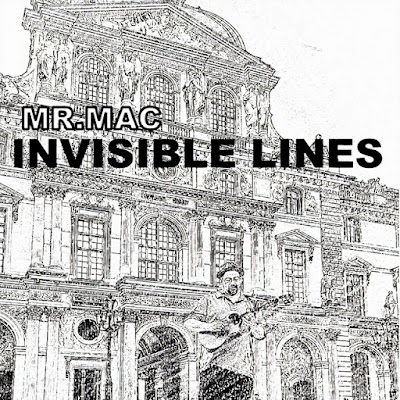 Founded by Dan McLaughlin, MR.MAC is a new musical persona that is set to take the American music industry by storm with original music as his album Invisible Lines makes listeners groove as they open YouTube. Listening to this album made me wish to read between the lines of his dense lyrics. This album features ten songs, and “Invisible Line”, the title song of this album has an ‘80’s, post-Punk energy. The rhyming of lyrics is awesome and this is a song that you will not wish to pause once you hit the play button.

The “Jenny Was” song talks about an Alt- girl who has something for everyone; except for the one who loves her. This reminded me of a song “Miss Independent'' by Ne-Yo which sent positive vibes by talking about a woman who did everything in the best way.

gives valuable advice about being careful in a situation of confusion.

“Donna Donna” is sung so nicely, and feels like MR.MAC's answer to Ricky Martin's “Maria'' because both of these songs appeared to be about some girl mentioned in the title. This song’s scintillating harmonica solo creates the feel of good ol' blues-rock of the 1960s.

So far, all of the songs have the feel of Jazz or Rock n Roll and then came “You Said It Was Doomed'' which sounded like an alternative metal song. MR.MAC does have potential to be a rock star. This song talks about seeing perfection in things that appear to be doomed from their inception. Seeing that MR.MAC can sing in so many different genres made me wonder if he has a Midas touch in the world of music, and creating gold in each genre he touches.

“Going Back Again” is my favorite song on this album. The Funk/Rock groove recalls revisiting memories: both the joy and darkness that it brings. (“Going back again/ a road without an end/remembering our crimes/living in a bubble in time…”)

“Island Days” made me ponder if the story of Robinson Crusoe inspired MR.MAC to write and create the song.  The verses of this song talked about being happy while exploring an idyllic island-- finding happiness in someone,  losing it in an instant, and yet somehow being ok with it all in the end.

“Another Way To Go Too Far'' is a song that touches upon strife and unrest in the streets (“...tear gas burns your eyes, while the demagogue smokes a cigar”).  It gives confidence to the listener, preparing their mind to accept the gritty realities of life and that they will find another way (probably an unconventional one) to release themselves from this veil of tears. The soft and soothing music of this song reminded me of an old song called “Don‘t Turn Your Back On Me Baby” by a rock band called Parikrama.

The title of “Microwave Burrito” made me wonder if the song was about snacks and it appeared that I was right. The throw-back, “gather-around-the campfire” vibe of this song serves as a comedic tribute to late night trips to the convenience store when you have the munchies.

Assuming that you are streaming these songs on YouTube while reading this review, and thinking about buying this album, then I would say that you are making the right decision. You can find it for download on the usual sites, such as Apple and Amazon music and also stream it on Soundcloud and Spotify. You must not miss any song on this album.