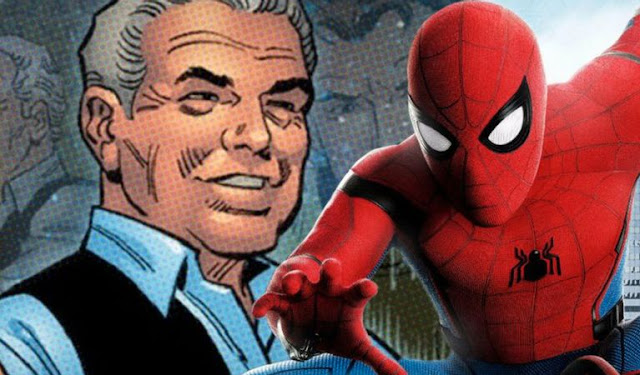 DISCLAIMER: All characters in this story are fictitious. Any resemblance to those who are living or dead is purely co-incidental. The characters of this story have not been created to hurt the sentiments of any community. Spider-Man is the copyrighted property of Marvel Comics. This story has been written for a non–profit series.

It was a fine morning in New York. May Parker was setting up the dining table as she called out, “Boys! Breakfast is ready!” May‘s husband Ben Parker came to the table. He said, “I will finish breakfast on time and tell Peter to do the same! Now you go and get ready! In the Midtown High School, today Peter is getting a medal for best performance in a science project! The project was organized by Stark Industries! It remains to be seen how much cash reward will be given to Peter! I hope it is big enough for us to cover his college fees!” May was walking towards her room as she said, “Peter is studious! I am sure he will make us proud in college!” After saying that, Aunt May called out, “Peter! Breakfast is getting cold!”
Peter was in his room. Coming out of shower clad in a towel, he answered, “Coming Aunt May!”
Looking at his formal shirt kept on bed, Peter aimed his wrist as he thought; “Can I pull that shirt towards me like this?” He tried as a thin web shot and got stuck at the shirt. “Bingo!” Peter whispered. Peter pulled the shirt towards him as he thought, “My aim is becoming better! But what should I do with my strange powers when I perfect them!” Peter put on pants and a formal coat as he rushed downstairs to the dining room. He started eating his breakfast at great speed. After finishing his breakfast, Peter lifted his backpack and said, “I am leaving Uncle Ben! See you at school!”
The parents of students were expected in school at 10 AM whereas students had to reach there at 8 AM. That is why, Peter left early. Aunt May was ready. She came at the dining table to have breakfast. Uncle Ben told her, “After a long time, I saw Peter so happy!” Aunt May replied, “Today he is among the most brilliant students in his school! He is not the scared little boy who was taken in by us!” Ben smiled with pride as he said, “You are right!” Ben remembered the day when he and May had taken Peter in.

7 year-old Peter Parker was sitting on a couch in a living room. May Parker was looking at the door as she saw her husband Ben Parker coming in. She asked him, “What happened?” Ben told her with the worried look on his face, “That strange man with eye patch told me that Richard and Mary are still missing! US Government wants to declare them fugitives! His team is looking for them but the possibility of them being dead cannot be ruled out!” Mary said, “We need to tell Peter!” Ben replied, “Not now!”
The Parkers went into the living room. Looking at them, little Peter asked, “Uncle Ben! When are mom and dad coming back? When can I go home?”
May spoke, trying to hide the sorrow in her voice, “You have to stay with us for a while!”Peter asked, “Why? Don‘t my parents want me?” Ben spoke, trying to appear strong, “This is for your own good Peter! Your parents want you here as they fear for your safety!” Clearly agitated, little Peter stood up and said, “No! My parents know no fear! They cannot be afraid! They are heroes!” Lifting a small backpack and pulling out a Captain America comicbook from it, Peter said as he put his finger on Captain America on the cover of the comicbook, “They are brave like him! My dad told me that in the history classes of High school, I will read about his adventures in detail!”
Kneeling in front of Peter to bring his head at the level of Peter‘s head, Uncle Ben said, “You are right! They never feared for themselves! They feared for you! That is why they asked us to protect you!”
Peter started crying as he hugged Uncle Ben. Uncle Ben embraced him and rubbed his back to console him.

Ben got up and said, “I will get ready!”