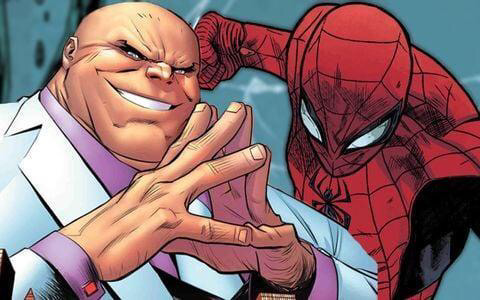 DISCLAIMER: All characters in this story are fictitious. Any resemblance to those who are living or dead is purely co-incidental. The characters of this story have not been created to hurt the sentiments of any community. Spider-Man is the copyrighted property of Marvel Comics. This story has been written for a non–profit series.

Find previous episodes at this link.

At the FiskCorp headquarters, CEO Wilson Fisk was in his office when his assistant James Wesley entered. Among the civilian employees of Fisk who had no connection to the criminal empire of Fisk, Wesley was the only person who knew that Fisk was secretly a crime boss and his name in the underworld was Kingpin.
Wesley said, “Mr. Fisk! Mr. Alistair Smythe is here!” Fisk replied, “Show him in!” Wesley responded, “OK Sir!” Wesley walked out and a young man Alistair Smythe walked in. Seeing Wilson Fisk gesturing him, Smythe took a seat in front of Fisk. Fisk asked Smythe in an interviewing tone, “Why do you want to work for FiskCorp when your father is a great scientist and working for our competitor OsCorp?”
With confidence and determination reflecting in his voice, Alistair Smythe replied, “My father Spencer Smythe is indeed a great scientist but I want to step out of his shadow and prove to the world that I am his equal in every aspect of life! Be it business or science! I am second to none!”
Appearing impressed, Wilson Fisk said, “US Army wants flying gliders on which soldiers can stand and fire at the enemies while flying! Norman Osborn met Gen. Thaddeus Ross and got a contract! But so far OsCorp has not succeeded in making it!”

Placing a file in front of Wilson Fisk, Alistair Smythe spoke with a victorious smile, “I have done my homework Mr. Fisk! This file contains the blueprints of everything that my father is working on related to this project at a top secret facility of OsCorp! He thinks that I am not aware of the location of this facility! I can make something more advanced than what my father is working on! And I would definitely want FiskCorp to sell it to the US Army!”

Visibly impressed, Wilson Fisk said as he browsed through the file, “Excellent! We have a secret facility! There we work on projects related to robotics and chemistry! You will work on weaponized gliders there and I will arrange material for you to power the glider! You will refine that too!” Alistair Smythe replied, “Thank You Mr. Fisk! I will not disappoint you!”
As Alistair proceeded to walk out, Wilson Fisk called out, “Smythe! You will get your appointment letter along with terms of salary tomorrow! And call me Wilson!”
After Alistair left, James Wesley entered with a large and bulky man. He told Fisk, “This is Mr. Aleksei Sytsevich! He said you were expecting him!”
Wilson Fisk replied, “Mr. Sytsevich is a perfect candidate for the next project that I need to kick start now! Do you have the serum?”

James Wesley checked his pocket and pulled out an injection as he said, “Yes Sir!”
Looking at Aleksei Sytsevich, Wilson Fisk said with a sheepish smile, “I promised you hundred-thousand dollars! You can earn $ 50,000 by injecting this serum in your body!”
Hearing that, Aleksei Systsevich took the injection and injected the serum. He started feeling energy. In a Russian accent, he asked, “What is this serum?” Wilson Fisk replied, “We wanted to create the super soldier formula that Reinstein created during the Second World War but our scientists were not so brilliant! They came up with the closest possible substitute that they could! You have injected it in your body! Now for 48 hours, you are strong as a Rhino! Extraordinary physical strength and immunity from bullets is what you have! And if you fail in your job, you will live only for 48 hours!”
Aleksei Systsevich spoke in Russian accent, “Rhino! I like the name! But what is the thing with 48 hours?” Wilson Fisk replied with a grin, “I cannot take the risk of you double crossing me and disappear with extraordinary strength! So I had to spend $ 1 Million extra to make the serum a little bit poisonous!” Visibly shaken, Aleksei Systsevich blurted, “What?”

Wilson Fisk gestured Aleksei Systsevich to relax as he said, “That poison will kill you in 48 hours! Complete the task as soon as possible and Alistair Smythe will give you antidote!”
Little bit calm, Aleksei Systsevich looked at Fisk and asked in Russian accent, “What do I have to do?” Wilson Fisk instructed Aleksei Systsevich, “Today evening, there is a magic show in the Patrick Henry Auditorium! It has been organized by OsCorp! Illusionist Quentin Beck is coming to perform! You need to crash the party, abduct Harry Osborn and bring him to the secret facility that I told you about!”
Aleksei Systsevich replied, “You will get Harry Osborn!”

After Aleksei Systsevich left, James Wesley asked Wilson Fisk, “You are confident that Alistair Smythe can give us an edge over OsCorp! Why do we need Harry Osborn?”
Wilson Fisk replied, “We cannot impress Gen. Ross just by developing gliders for soldiers! We also need a unique way to power them! My sources at OsCorp told me that a thief called Black Fox stole some documents and blueprints from Stark Industries and sold them to Norman Osborn! Using them, Norman Osborn has developed a Multi-Isotope Radio-Decay Cell! He wants to create many such cells and use them to power the gliders that he is developing for the Army! If my suspicion is right, then this Multi-Isotope Radio-Decay Cell is the same thing, or wait, more like a mini version of the arc reactor that powers a metallic suit developed by Tony Stark! He named that suit as Iron Man suit! If my estimation is right, a Multi-Isotope Radio-Decay Cell can power a glider for at least 15 years! Busy with gliders, we don‘t have to do research and develop the battery! If we have Harry Osborn, Norman Osborn will give us the developed Multi-Isotope Radio-Decay Cell willingly! Our innovators can copy it and create more batteries in a short time!”