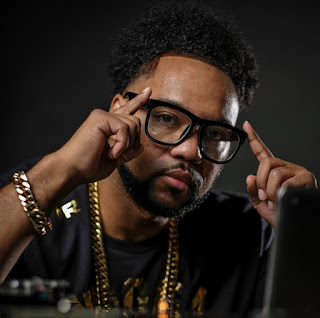 So EXTRAORDINAIRE where are you from, and what’s it like in your home town?

I am from Chattanooga Tennessee. I was born in Nashville and spent a lot of time in that area learning the music game and my father was from Atlanta so I spent a lot of time there  with him absorbing that rap scene coming up. Back in the day a lot of artists broke in my Chattanooga so we have a great history and a real dope music scene in and of itself

Could you tell us more about Black Folk Inc. and Circa 94 Beats?

They are both musical outlets for me. BFI is a musical I started with my partner B-Lo Brown and it was supposed to be a flip on NWA and we have released a few projects and singles over the years . Circa 94 Beats is a production crew that B-Lo is also apart of as well as my partners Mcghee and K2 .It's an outlet for other types of production in hip-hop that is not in the mainstream. Jazz to Boom Bap to lofi.

How long have you been doing music and who are some of the notable people that helped you along the way?

I started in the game when I was like 12 and B-Lo Brown was actually instrumental in me getting started in the game because he was a little older and had a crew that DJ'd and made beats. I was cool being the hype man and eventually got equipment and worked up to being a producer and eventually rapping. I later went to Middle Tennessee State University where Tay Keith graduated for its Recording Industry program.

I did a song  called "Bobby Brown" after the R&B legend Bobby Brown of New Edition fame. I shot a video in his honor and it seems like as I was about to roll it out he had a tour , a a documentary and reality series drop at the sametime so it's all love to the King of Stage. I was lucky enough to get him in my music video for a cameo which was an honor.

What was your first major success and could you tell us about the experience?

My first album with Black Folk Inc. got a lot of love from critics and magazines that championed us to the masses. It let me know that I was built for this. While I  don't always win at the level I want to , I continue to get those little signs that I am not losing either and those bright spots keep me moving forward, That is a success in my book: doing something you love and getting confirmation that I am on the right track.

Besides music do have any other interest and hobbies?

I truly like being as low key as possible when not working on music. So that includes movies and TV watching. I am also getting my game up on investing for the future especially nowadays

I am plotting out several musical releases  from singles to EP's . I am an indie so even though I know it helps to put music out regularly I want to take my time and make everything as much of an event as possible. So taking my time to set up my marketing and promotional plan with my team is nearly as important to me as the music.

Anybody you would like to work with, and why?

I have some dope features lined up and some projects with some legendary artists that I am in the process of finalizing. Stay Tuned