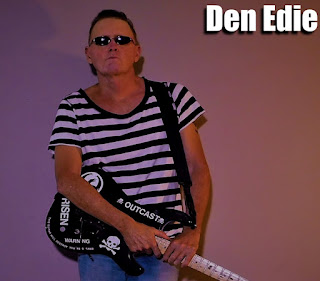 So could you tell us a little bit about your upbringing in Ohio?

I was sent to guitar leasons by my parents when I was 10 years old. My uncle lived with us back in  Ohio then and he played the drums. I grew up with a Rock band practicing in my basement.  I did not know it at the time but this little town I lived in knew how to rock.

When did music become your main interest and what lead you to take music so seriously?

When I was 13 I saw my first rock concert. It was The kinks (one for the road tour.)  It changed me instantly. Suddenly that was the only thing I wanted to do.  To this day I'm still doing it. My guitar obsession had just started and  I did take some music theory lessons as well. I began learning how to create music or write a song.  I recently worked with two clasical Violinist. A Saxsaphone player and a Pianist. The Music theory lessons did pay off as I was able to talk to them in a launguage they understood.

Being a Singer and songwriter what are some of the creative routes you take to make the ideal song?

When I write the song the only thing I think about is expressing the feeling. Most of the time I do not even know where the lyrics come from. "She thinks I'm Crazy" was not even meant to be on the Album but one songs did not work so at the last minute I need one more song. The song was written dacades ago and would be dead and gone but for some reason It's still alive. It felt right at that moment so it found it's way on the Album.

Could tell us about the band Vein?

By chance my first band was a punk band and after I had played in a few bands it was becoming clear that I probably sing as well or better than any of the singers we could find. I was also writing the songs so the guys I had been playing with for several years reformed and we called our new band "VEIN" with me as the Lead Singer.  It was the mid 90s and alternative music was big. We fit right in. At the time if your an all original alternative band, unsigned with no support and you last 5 years and record 3 albums you did well.

Today I have finished my latest Album which is just going into post production. it will not be released for several months but this is where I use the Violins and Saxsaphone and Piano. The new material has an 1980 like synthiziers sound as well.  I do not rely on my guitar playing so much like I use to.  It is by far the best Album I have ever made and I hope to let everyone hear it soon.

CHECK OUT DEN EDIE WITH HIS GROUP THE AMAZING COW PUNKS