Exclusive Interview With Son Of Janus 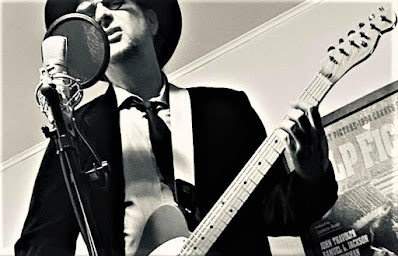 Where are you from and could you tell us about your upbringing?

I lived most of my childhood years in Beloit, Wisconsin.  I was raised by two parents who taught me to believe in Santa Claus, tilt my head backwards when I had a nosebleed, and go to church every Sunday.  I believe I have failed them on these things.  But, they say they are proud of me.
So Son Of Janus, that is a very interesting name how did this come about?
I was sharing studio recording of my song under the name my parents gave me, when I realized that if I wanted to get serious about this, it would demand a rebranding.  I consulted with a good friend, Eric Kaun, who was responsible for coming up with the name of the band I was in during high school.  Going with the premise that my mother is named Janis, he floated Son of Janis, which I immediately took a liking to.  He then suggested I could go further and spell it like the Roman god, Janus.  I took the first idea, but the idea of suggesting that I was the offspring of a mythical deity grew on me, so I went with Son of Janus.  The name captures my spirit in that I am a child of western culture.
What genre of music do you make, and where do you find the inspiration?
I have a hard time categorizing my songs, but the songs on the album are definitely inspired by some 80s and 90s rock.  Alternative rock I guess.  The songwriters of that time helped me find my true calling.  I like to think that I explore areas that they might of missed back then, so I can make it new again.

Son of Janus is my debut album.  It is a compilation of songs I wrote in the 80s, 90s, and recently.  I felt compelled to finally get them recorded to share with the world, so I learned how to play all of the parts and recorded them all at my home studio.

Who are some of your influences?
The works of Mark Knopfler and Dire Straits, Peter Gabriel, especially his early solo work.  Pink Floyd in how they expanded the confines of the genre.  I have to mention The Cars, Tom Petty and Heartbreakers, and The Psychedelic Furs to round out the main 80s influences.  Later artists like Radiohead and Garbage, and now Black Mountain, The Easy Access Orchestra, and The War on Drugs, to name a few.
Are there any notable people that helped you along the way?
Before getting the support I needed, I had to purge my life of the people who were not looking out for my best interests.  I don't think this album would have been released without the support of my wife Aimee, who not only did the artwork for the album cover, but also for the singles Addiction and For a Change.  I should also call out an old friend since elementary school James Carratt, who mixed and mastered all of the songs on the album.

Besides music what are your hobbies and fun things you like to do?

I enjoy game mastering the role playing game Pathfinder, which is much like Dungeons & Dragons.  I also like to go on long nature walks, otherwise known as hiking.

Are there any changes you would like to see in the music industry?

I don't think so.  It's not like it was a few decades ago, but the gatekeepers have changed.  It's easier to put your own music out than it ever has been even though it is challenging to get traction, which has always been the case.

Here are the links to his music: Spotify: https://open.spotify.com/album/4y6aumYbvodt0Z9WWwXPoE?si=57b98e8ed314410e