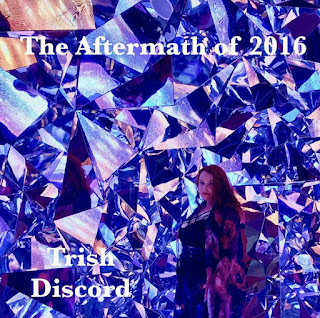 So Trish Discord, how did you come up with such an interesting name?

I thought the word “Discord” for me pretty well as it describes feelings of unrest and expressing those feelings. I found out later that the app Discord was a thing but still liked my name enough to keep it anyway!

Where are you from and what's it like in your hometown?

I am from Whitestone in Queens, NY. It is on the outskirts of queens and has a suburban feel to it while still being able to access the city and other areas of NYC. I like that there is almost a small town feel without it being too small where you run into the same people over and over.

Trish can you tell us about your background and how you became a music artist?

I played guitar throughout the years and took singing lessons since high school. I always loved writing songs and only in recent years realized I should finally release them to the world. I have an office job but day but always was passionate about music. Now my office job funds my music and I manage both!

“The Aftermath of 2016” is about the political and personal events that happened in 2016 that had a rippling effect on the years following. I was in London during brexit and returned home to the US afterward to Trump being elected while being in a long distance relationship that wasn’t working out. This album is about all those components and coming to terms with them.

What's the average day of creativity for Trish Discord?

I would say most of my songs come to me at 2am when I am trying to sleep and a melody finds it’s way into my head. I then record a voice memo and the following day try to create lyrics and think about the mood of the song I am going for.

Besides music, what are your other interests?

I love traveling (which is what the song Take me Away is about with finding an escape through traveling), trying new cuisines, going to wineries, and axe throwing!

Is it anybody you like to work with and can you tell us why?

I would love to work with Mitski or David Byrne cause I feel like they have creativity off the charts and we could come up with something amazing!

I will definitely keep working on new content and plan to release a few singles in between when my next album release would be.

Be sure to check out the music video for “I can’t wait to forget you” and keep an eye out for the “In Another Life” video coming out soon! https://youtu.be/bweKWTpleJs Thanks for featuring me!