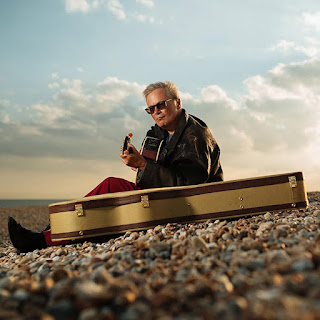 I live deep in the English country side by the river. Most of my life I lived in London. My first album “Landells Road” is named after the street I used to live on and where I recorded the album. It’s a kind of post Beatlesque affair, classic songwriting and dabbling in many genres. My last album “Riverside” was named after the place I moved to in Kent and is more 70’s singer songwriter influenced. It’s quite pastoral in feel and quite English in many of the songs. Songs about the Pre Raphaelites, Rupert Brooke. Not your average rock ’n’ roll subjects.
What genre of music do you make and when did you first decide to be a musician?
I never wanted to be a musician. I wanted to be a songwriter. I needed to be a musician to be a songwriter. If you had to put me in a little box with a label on it then “singer-songwriter”
Who are some of the notable artists and people that influenced your career thus far?
My first love was not pop or rock music but movie themes and my earliest musical heroes were the likes of Ennio Morricone and John Barry. Then I read Hunter Davis original biog of the Beatles and thought that’s what I want to be in a band with my mates. Then I heard early Paul Simon. He was writing these existential lyrics all wrapped up as a cute little pop songs. That’s when the light went on. A writer like Bruce Springsteen can conjure up a character’s life story in a few song lines or Joni Mitchell can turn turn your expectations around with a simple understatement. It’s the power of the 3 or 4 minute song to encapsulate life, love, existence. It’s the craft of songwriting I’m looking for in music. Of people around at the moment First Aid Kit and Bon Iver are good. I listened to Ryan Adams re telling of Taylor Swift’s 1989 and realised what a damn good writer she is. Folklore was my favourite album of last year. Lana Del Rey is another excellent songstress in my books. Both heirs to the Mitchell crown.
Could you tell us about your latest project?
My new album “Starfish Memories” is out on the 26th August 2022. There’s 11 tracks that reflect the world we live in from songs about personal relationships to war in Ukraine, COVID and COP 26. There’s songs with immediate hooks and singalong chorus's and then there’s more intimate ballads and reflective songs.
The opening song “Blue Skies, Fields of Gold” could be an anthem for Ukrainian resistance. “Radio Radio” has that sort of nagging catchline you just can’t get out of your head. “The Bridge At Midnight” is coded and dense lyrically and builds to an apocalyptic cataclysm. “It’s Going To Be Okay” has been described as the “ perfect anthem as we emerge from Covid”.
The album is self produced and I play all instruments and  do all vocals bar a couple of backing Vox on all of the tracks.
What should we expect from you in the near future?
More of the same or something completely different. The future is a foreign country. In the back of my mind there’s and inkling to do a Scott Walker style album with lots of string and orchestral arrangements. Then maybe again a starkly acoustic just me and a guitar album. Or maybe I’ll do an album of alternative movie themes
Could you give us some advice that you can offer to someone who is just getting started in making music?
Don’t. It’ll only get you into lots of trouble. You’ll never make a living from it. Get a steady job like school teacher.
Are there any important achievements you have  since beginning to do music?
I will shortly have put out three solo albums. I’ve played numerous venues in the U.K and abroad from intimate clubs to larger venues holding thousands. I’ve worked with name producers and cropped up on the odd compilation album and been played on daytime prime time radio.
Besides music, what are some of the things that you are into?
Walking, Gardening, Photography, Diving, History, Cosmology, Books, Ecology, Film, Art, Travel, cats
Are you currently on tour or planning to be?
No
Any last remarks?
Yes
Buy the new album or promo E.P:
https://chrislewington.bandcamp.com
Listen to my songs:
https://open.spotify.com/artist/5DrebAGXyWuRUgOtdouSjp?si=yvRCBDjESLmDL9nGzrBQYg
Find out more:
https://www.chrislewington.co.uk
Follow me on social media and get the latest song from the “Comfy Armchair”:
https://www.facebook.com/ChrisLewingtonmusic
Watch some video:
https://www.youtube.com/user/songsinatincan