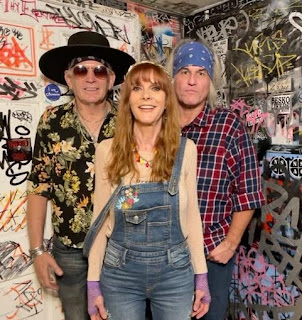 Rock n Roll! We all decided as teenagers that music was our passion.

Our single “Didn’t Say Goodbye”  is the latest. This is a song Jackie wrote. Michael sings lead and did all the drums & percussion. Christy plays multiple guitar tracks including the bass, sang background vocals with Jackie and was the producer of the song as well. It’s doing great on all platforms!

We will soon be  releasing our LP

Do what’s in your heart, play what you feel. Try to have fun…don’t get too serious. Laugh a lot.

Christy did world tours with Bret Michaels and played on 5 of his solo albums. Michael & Jackie had a record deal Warner Brothers France

Currently putting a new show together.

Any last remarks? Stream our single  ffm.to/didntsaygoodbye Thanks you rock!