ILL Badaa releases S.O.M.E and sheds light on his purpose 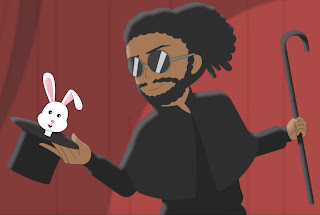 What is the main message you want to convey in your animations?

Life is not random. Life moves according to a plan and a plan has patterns.” In my animation we like to point these “Patterns” out. We feel it can help people to live better lives.

Do you feel cartoons could have a bigger effect on todays youth?

Definitely! When I was young at least 80 percent of what we watched were cartoons. I think we may not have known then, or even now, just how much cartoons and animation have shaped our thought process.

What lead you create the name God > Animation Studios?

I was given the vision that story telling would be a powerful device in pointing out the “Patterns” that we all run into in life. After being exposed to Animation, I could see quickly that the potential “animation” possesses, it’s more powerful than I think any of us have seen, to date. The same Source that inspired me to talk about the concepts that we attempt to tackle, took the animation and showed me that what I first wanted to accomplish in film, could be done with less restriction with “animation.” Stories, the Narrative, pervades our lives. When we make music we speak on and or almost create a New Narrative. Drama allows the opportunity to confront whatever the Narrative is, to critique it, to correct it, and even to perhaps challenge it. This idea, couple with all my influences and their Grace, partnered with GOD’s inspiration, led me to starting GOD > Animation Studios to create produce and bring to life these “pieces,” that dare to address “The Narrative,” in all forms.

So who is ILL Badaa the cartoon character?  What are some of the intriguing details?

Hahah I love that you asked me that. IllBadaa of coarse starts with me. He is the cartoon me who expresses and reveals all of his human struggles, in a way I am not so sure I am willing to. Illbadaa is a even tempered , work from home , Dad , who gets pulled into this amazing adventure.  In this adventure, illBadaa meets Jesus before he is the Jesus of his adulthood that we know. He meets Jesus in our Theatrical Release of Kid Jesus, which is being released in 2023. Its such an amazing adventure i dont want to give away all the twists and turns, but we are working really hard on it and we think you will really like it. What I find most interesting about illBadaa is his strength of Faith and his vulnerabilities. I think a lot of people when they actually get to know illBadaa, they will see a lot of themselves in him and his journey.

Could you give us some details about the Kid Jesus series?

Kid Jesus will be a Theatrical Series Release. Multiple characters have this amazing separate yet shared experience with Jesus as a child. I think it will be very revealing for us as a society, for many individuals , and also at the same time it will revisit some of the cannon of the Bible that refers to Jesus’s life and the way people lived in those times. What a remarkable opportunity to explore humanity and address some of our shared concerns?

Could you tell us about your latest project S.O.M.E?

Some stands for Stay On My Equipment. It is more of a reminder to those who follow our work, that yes we are always most proud of our Social messages. This is why we exist, but at the same time, we as Creators see ourselves as those who endeavor daily to Master our Craft, so don’t ever sleep because I am an Emcee and I’m forever putting in my 100,000 hours in. Whether i “feel,”like it or not i am alway perfecting my craft and appreciating those who have supported and stuck with me on this journey. So Stay on My Equipment was a thanks to my supporters and a reminder to fellow emcees that ima problem on that mic so dont play, hahah.

Are their any other major characters in your universe?

Yes there are multiple characters in this universe that we will be developing and introducing and all of them have backstories that feed into the main story so stay tuned.

As an anime studio we are going to pump out great messages using music and animation while we continue on Kid Jesus, and Kid Mohammed after that.

Where can everyone enjoy your content in the most sufficient way?.