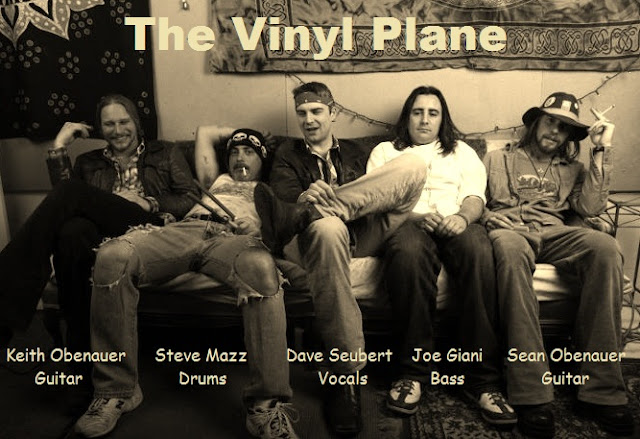 The Vinyl Plane
Webpage: http://www.thevinylplane.com/
Location: Uniondale, NY, US Description:
The Vinyl Plane is a rock band; five talented musicians with a distinct “throwback” sound. Some call it southern fried blues?rock, with a dash of Neil Young, a slice of Humble Pie, a sniff of Joe Walsh, some cargo from the Drive?By Truckers and benea The Vinyl Plane
Biography:
Dave Seubert is the singer and harmonica player. Dave played in acoustic and electric bands in college and enjoyed it so much; he left school to pursue a career in music. He was in a band called “Unmarked” when Keith’s brother Sean introduced him to Keith Obenauer in September of 2006. Unmarked was falling apart and Keith had some great songs Dave couldn’t wait to write some lyrics for. Two months later, Dave and Keith started The Headie Berrie as a four piece band. When the band had some woes, they decided it was time to shake things up and add another guitar. Keith's brother, Sean Obenauer, was an obvious choice. Dave had heard him playing guitar and asked him if he would join the band because he had great chops. Joe Giani had played bass guitar in many bands before, but was looking for something different. Joe is a very talented musician and is essential to the fine tuning of the band's music. The band's named changed to The Vinyl Plane, upon the addition of Joe. After many failed attempts to find it, they still needed that final piece of the puzzle. They found it in Steve Mazz, the drummer. Steve, had been a good friend of the band and happened to have some time in his busy drum schedule to come down for an audition. The minute he started playing, the other band members knew that their long, exhaustive search for the right drummer had ended. Apparently, Steve's search was over too, because he dropped all his other bands for, what he called "what I've been looking for:"- The Vinyl Plane. The Vinyl Plane
Press Release:
“People like to complain about the current state of music ... how it's going techno (...since the 80's...), or how shallow it's become (...not that the Archies were any better...) or how it's all alt rockish where nobody can play their instruments (...Little Richard has confessed to only being able to play in one key...). For the nostalgic, what happened to the line of development stemming from 70's classic rock? Where's the real blues players & not just guitarists who play blues scales? Where's the music that follows the influence of the Black Crowes instead of Nirvana or Lynard Skynard instead of Black Sabbath? Is there a band out there that has keyboard breaks that aren't meandering lost in classically influenced prog tunnels? Well, if any of the above is on your to find list then you'll enjoy this little EP.” Aaron Joy - Roman Midnight Music
“The Vinyl Plane are a bunch of indie rockers from Uniondale, New York with a psychadelic/Southern rock sound. The lads have 2 albums and an EP just out. I’m digging their groove and their Twitter feed is hilarious, especially the alternate definitions for T.V.P. (“Turbulent Vision Premonitions”…good one!). You can check them out on MySpace and catch them live if you’re in Hicksville on April 23rd. Wait, is that really a place? ” Christine (Sticketgiant.com) - StickerGiant's Blog of Stickers.
“Fortune is smiling on the Vinyl Plane in 2010. “Alcyon Playground,” one of the three bonus tracks added to this Long Island quintet’s second album, blends soaring harmonic guitars, great singing and tight playing from one of New York’s hottest young bands. The group has already written seven new tracks for their third album, to be released this fall. www.myspace.com/thevinylplane” Relix Radio - Relix Magazine
“(DISCLAIMER: T.V.P. WAS FORMERLY CALLED THE HEADIE BERRIE) Long Island quintet The Headie Berrie return with a freewheeling full-length follow-up to their recent four-song EP. "Morning Toast" further fleshes out their love of hardened jam rock with an emphasis on guitar heroics and vocal histrionics, playing the riffs like they own them (even if Hendrix and Clapton really do) while implementing the harmonica in key spots with the attitude that the love is still free and the drugs are still pure believed by all. Referencing everyone from Phish to Blues Traveler to Mother Love Bone ("Musicism"), The Headie Berrie boasts a brother guitar duo whose intriguing interplay never gets stale, bolstering their boisterous brand of modern boogie rock with shards of straw-chewin' country and a dash of revolution rock a la Credence Clearwater Revival to smooth out this topsy-turvy tie-dyed tirade ("Souless Shoe")........ ” Mike (SOS) - Rough Edge: The Headie Berrie CD Review “(DISCLAIMER BEFORE ARTICLE: THE VINYL PLANE WAS FORMERLY THE HEADIE BERRIE) The Vinyl Plane