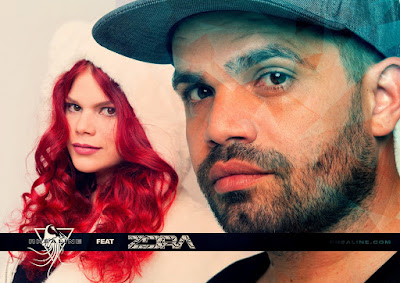 Rhealine: Rhealine is pure, evolutionary. Its cross-continental collaboration is rooted in the science of pop and electronic sound. The idea behind the poptronic influence generates a functionality persistent in identifying a unique contemporary pulse. The fusion resonates fresh domain and a sound definitive to the eclectic brilliance of its broad-based artists; performers and musicians. Come inside Rhealine and take a taste of a more creative, personified edge.
Zora: Netherlands native, Zora, has spent the past decade perfecting her aptitude for song. A University background in music and design, with a heavy dose of passion and charisma has primed her for the future generation of bankable talent. Her striking presence, remarkable vocal range and lyrical genius, have put her on the fast track of young artists emerging from Northwestern Europe. Her early ambitions were fueled through experimentation in a variety of genres, including jazz, blues, classical, pop and rock. She has performed in both harmonizing duos and full-fledged bands, lending her voice and song-writing talents to the mix. Her own father joined musical forces with her, in which he played the electric guitar. Zora credits her inspiration to the multi-talented singer-songwriter, musician and record producer, Kate Bush and the hard-edged band Halestorm. Ms. Bush’s somewhat surreal edge prompted her to explore the gothic fairytale-esque side of her own sound and push it to new limits. The band Blackbriar is the prodigy of the more unearthly sound and the rock/metal band serves as one of the homes for Zora’s musical outlets today. The band’s acoustic live performance of “Hear You Scream” is proof positive that she can, indeed sing. Currently, Zora is creatively collaborating with music producer and musician Florin Lazar out of the United States. The two have joined forces in an attempt to bolster Zora’s image state-side and blend cross-continental aspects to her music, offering the unique effects to a wider audience. She’s excited to be working in the controlled comforts of an intimate studio setting, alongside a savant of the music world.
Florin: Transylvanian bred, Florin Lazar, is a visionary in hot pursuit of a cross-continental sound capable of redefining traditional technique. Learning to play the guitar and drums led him to conceptualize the idea of originality and sparked the appetite to generate a new breed of sound. He sidestepped conventional academia and immersed himself deep within the world of musical studies and the complexities associated with creativity. He applied a rigorous concentration to the areas of instrumental and composition. The lush European landscape, rich in historical undertones, provided the perfect antidote to nurture his ingenuity and proved cathartic to creative development. Florin’s involvement in radio commercial production and a background in Drum’n’bass, GOA and Techno composition, offered a continuous stream of collaborative projects and a healthy dose of experimentation in electronic sound. His early beginnings literally rocked the music world with the introduction of computers into the DJ description. It put a whole new spin on the concept of underground parties and playable tracks. The switch from decks to screen ignited a sense of euphoria that infiltrated the music scene to its core and sent Florin and his collaborators into a fury of creative expression. The move from Europe to the United States brought new territory and fresh opportunities to the table. Florin continued writing, playing and perfecting music in his studio, while adapting to the culture of his surroundings. He signed with BMI and VTown Cartel Music. To his credit, one of his songs received play in a documentary based on music icon, Michael Jackson. Time and time again, he was reminded of the universal effect that music had on the lives of musicians, performers and writers from all walks of life. He spent a period of time ingesting the sights, sounds and electricity of New York, before eventually settling in Chicago’s metropolitan area. Currently, Florin is concentrating his creative energies on the development and promotional aspects of his music production company, Rhealine. The cross-continental project is heavily influenced by his histories with EDM, GOA, Techno, Drum’n’bass and Ambient. Vocalist, Zora Cock, is the newest highlight to the mix and an integral component to the project’s attempt at capturing the pulse of contemporary electronic sound.