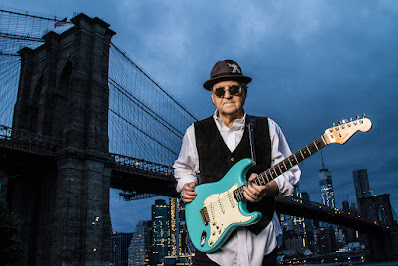 Born and bred in New Jersey in a town called Maplewood. I got interested in music from as far back as I can remember. There was always music playing, either from a radio or a record player. I took to rock’n’roll like a fish to water. When The Beatles came along I got a guitar and lessons for my birthday and haven’t looked back. Once I started playing guitar I was in various bands, rehearsing in basements and garages. The earliest performance I remember was like being 5 or 6 and having my friends back me up singing in the street to impress some teenage girl I had taken a shine to. lol

If I wasn’t a musician I probably would have been a DJ because I love playing records. As a matter of fact, my whole family loved records. We’d go out at night every week or so to a record store. It was a thing to do. My uncle built his own stereo and speaker system. The house would shake from the bass when he played his records. Now I know where I got it from! lol

My primary genre would be Rock, more precisely Roots Rock. This includes Americana, RnR, etc. and at Radio I get classified as AltRock, so it varies. I decided as a teenager I was going to be a musician and when I went to college I began to focus on being an artist. I was really into writing songs. I don’t know what it’s like today, but back then, being a musician had status. You were looked at differently and admired for it.

My influences are pretty diverse but certainly The Beatles and Stones are early ones and then Buffalo Springfield and CSNY came along and got me interested in acoustic guitars and harmonies. I think the final influence would be Rockpile from the New Wave era. It was during that time that Tom Petty came along and I began to follow him. Springsteen was also around and my band was discovered by his bass player Garry Tallent. He was our bass player for almost a year until he had to go on The River Tour with Bruce. I would hook up with him again later as a solo artist. I recorded the DownTown On E Street release with Garry and fellow E Streeter, drummer Max Weinberg. Working with them was a real eye opener.

My latest project is called AmeriKarma. I started recording tracks with long-time compatriots Steve Holley on drums and Paul Page on bass in January 2022. I’m mixing and still recording vocals as we speak. It’s probably the most diverse project, song-wise, that I’ve ever done. In May I released the 1st single Fly and next week I’m releasing the 2nd single Superstar with the To Sir Elton With Love Mix. Those 2 songs are a good example of the diversity I’m talking about because they’re as different as you can get.

Originally I was going to call the album Americana, because all the styles of the songs fit that category, but then I changed it to AmeriKarma because there was this feeling of karma inherent in the project. I think the Covid Pandemic has a lot to do with it. It’s like a time warp hit the world and I think there’s so much we haven’t dealt with. The songs on AmeriKarmadeal with life and death and the emotions that come with all that. I think there’s going to be a lot of new music coming out about this period.

I think I’m going to be very busy finishing the AmeriKarma album and putting out more singles before its release sometime next year. That means radio promotion and marketing, so that will keep me busy for some time.

I usually get asked this from friends who want me to tell their kids it’s a bad idea. lol

But if someone is really into making music and is serious about it, I think this is a great time to do it because of all the tools that are so easily available. It’s a totally different game now from just the 90s and early 2000s. Think about what it would be like if you didn’t have MP3s or a computer, let alone software like Pro Tools and streaming services like Spotify. I’m always amazed at what we have at our fingertips now compared to 20 or 30 years ago.

I think one of my main goals as an artist was to get played on the radio. Radio was THE main place to get heard until recently with Streaming. But growing up we constantly listened to the radio because that’s where you heard new things. Luckily, I finally succeeded in getting radio play. I’ve had my music played on radio stations in 35 countries around the world. I’ve been #1 on charts in the US and Europe. But my biggest achievement has been in Sync Licensing. This was not something that was on my radar until 2009 when I submitted music to a company looking for songs for their music library. I had no idea what it was all about until I got a BMI Royalty statement a year later and found out that one of those songs had been placed on The Voice! Since then I’ve had my music sync-licensed on over 230 TV shows and films.

One of the main reasons I’m called DownTown Mystic is because I’m a Numerologist with an extensive background in Astrology, Tarot, I-Ching and Runes. So I like to put a spiritual vibe in my music when I can although I consider music, by its nature, to already have a spiritual vibe. Every day is a mystery and I like having unusual experiences, so to speak. I also like being a Magician. It’s very close to being a Musician, just a couple of letters changed. lol

I’m not touring. The pandemic nearly wiped out the “live” situation and in some cases, did. I prefer the studio right now.

I’m going into promotion mode with the new single coming out, so I can’t help myself…

I’ll be one of the Featured Artists next week on the M:M Music Listening page: http://www.mmmusicsite.com/listening/listening.html

I would just like to tell everyone that the new single Superstar comes out on October 14 and will be available on their favorite streaming service. Thanks!